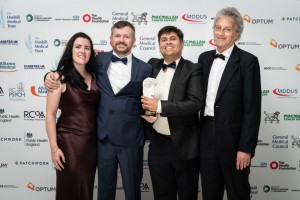 We are thrilled to announce that SUDEP Action and its partnership of researchers and clinicians, have won the Education of the Year award at this year’s British Medical Journal (BMJ) Awards 2019.

This respected award recognises the success of two epilepsy safety tools; the digital app EpSMon for people with epilepsy, and the clinician tool, the SUDEP & Seizure Safety Checklist. Since their launch in 2015, these tools have been recognised as having the potential to transform epilepsy patient safety and improve outcomes for people living with the condition.

The safety tools won a BMJ Award in 2016 for Neurology Team of the Year, and ‘Highly Commended for Innovation in 2017. Also, in 2016, the tools won the Health Service Journal (HSJ) Award for Education and Training in Patient Safety. EpSMon was also featured as one of six projects chosen by the NHS to celebrate digital innovation within healthcare, as part of their 70year anniversary in 2018.

The award judges commented, "The Epilepsy Safety Education programme has tackled a major problem in epilepsy – the problem of preventable deaths. The programme has involved a safety checklist for clinicians to help them better manage risk in patients and also a patient-facing app. It is about education of clinicians and patients, and driving shared decision making. The programme is both original and ground-breaking and will have a major impact in improving care for patients and their families. Epilepsy Safety Education is an outstanding winner of the Education Category of the BMJ Awards.”

With over 600,000 people in the UK with epilepsy, there are a lot of people that are impacted by the success of such a conversation and ongoing education on epilepsy risks.

Sammy Ashby, SUDEP Action Deputy CEO & Project Manager for these projects commented “We’re delighted that these projects have been recognised by this award; many people with epilepsy and their clinicians are not well supported to reduce their risks, yet these simple conversations and checks  have the potential to save many lives each year. 21 people die every week in the UK – every one of those is worth fighting for. By reaching even more people with these solutions, we hope that future lives can be saved, in memory of those who have died.”

The SUDEP & Seizure Safety Checklist was developed in Cornwall (UK) as a collaboration between SUDEP Action and Cornwall Partnership NHS Foundation Trust. It is supported by a Development Group of leading experts in the field, and is entirely funded by bereaved families in memory of their loved ones.

Currently used by over 650 clinicians nationwide, it provides the latest research on epilepsy risks to clinicians, boosting their own professional education. It also aids the monitoring and discussion in appointments about a patient’s epilepsy and general wellbeing - informing them of possible health risks. Research findings have already shown that these discussions are potentially lifesaving.

EpSMon is an epilepsy self-monitor app, which encourages people with epilepsy to actively monitor and take action against epilepsy risks, in between appointments. Based on the information and research within the Checklist, EpSMon enables users to assess their epilepsy and overall wellbeing periodically, calculating and informing them of when a clinical appointment may be appropriate. This further improves patient safety and knowledge by alerting the individual about any specific risks that may not necessarily be picked up elsewhere. Research on the app has shown that 44% of users hadn’t previously had epilepsy risk discussions with their clinician, despite the app showing they were experiencing known epilepsy mortality risks. 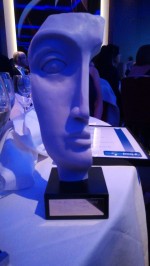 Dr Craig Newman, said: “It’s just amazing news. To have won once was fantastic and twice is unheard of within this sector. Winning the prize was only heightened by winning it alongside a team I greatly admire. Hopefully this recognition will help more people become aware of the app because that’s the whole point of research and digital innovation – making a positive difference to those who need it most.”

Dr Rohit Shankar MBE added, "The reccurent and renewed recognition of the updates and developments of the epilepsy safety project is an endorsement of its potential to make a difference in saving lives of all people with epilepsy, particularly those at higher risk i.e. those with ID, mental illness, comorbidity or socially deprived. The project benefits from a diverse range of expertise. The hope is where the NHS Longterm plan has indicated digital technology to be a big driver of change in health care delivery EpSMon and the Checklist are vanguards and templars to it."

Dr Brendan McClean said, "The award shows that our programme of empowering patients, and supporting those who are vulnerable, can make a difference. It has been a team effort, not least from the patients, their families and the charity, who have been involved from the outset, and have made it such a success. We would hope that what we have developed will be implemented nationwide, to allow others to benefit from what we have achieved."

A recent Public Health England report (2018) highlighted the shocking statistics concerning neurological deaths (including epilepsy) between 2001 -2015, had increased by 39%. Nearly half (49%) of the epilepsy deaths recorded, were untimely deaths. With 21 epilepsy-related deaths each week in the UK; action is needed to both raise awareness of the potentially fatal risks linked with the condition, and also to help people with epilepsy to reduce them and improve their wellbeing.

If you would like more information about how to reduce epilepsy risks, visit: www.sudep.org or call 01235 772850.