Dr. Shankar (Cornwall Partnership NHS Foundation Trust) has been awarded an MBE in this years’ New Year’s Honours List in recognition of his dedication to providing services for people with learning disabilites (many of which also have epilepsy).

SUDEP Action has supported and worked alongside Dr. Shankar for many years on research projects which have developed an understanding of epilepsy deaths, SUDEP and epilepsy risks. His work with the Charity includes the Epilepsy Life Project and has since developed into the SUDEP and Seizure Safety Checklist research project, which has helped to significantly improve risk awareness and overall safety for people with epilepsy, including those living with epilepsy and a learning disability; reducing the number of epilepsy deaths across Cornwall. 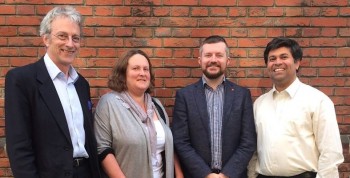 Research has found that epilepsy is the second most common cause of death for people with learning disabilities. It also found that in the majority of cases, no-one had talked to either patients or their carers about the risk of SUDEP and how that risk could be minimised; but the projects mentioned above are helping to change this.

Sammy Ashby, SUDEP Action’s Director of Policy and Development, who works alongside Dr. Shankar on the Checklist Project commented ‘We’re delighted to hear the exciting news that Rohit is receiving an MBE for his work with people with learning disabilities. He has helped to drive forward research into epilepsy deaths, and through his work in the Learning Disability community has helped the charity provide tools to both clinicians, people with epilepsy and their families that can and are helping to improve safety and prevent future deaths.

He has always been incredibly supportive of SUDEP Action, our bereaved families, and our work. This recognition is well deserved, and I hope it helps to raise the profile of the need to tackle epilepsy deaths among the public.’

For more information about the SUDEP and Seizure, Safety Checklist Project, see here and his SUDEP Global Conversation article summarising his work in reducing epilepsy risks in Cornwall can be read here.

To see Dr. Shankar's summary about SUDEP via the British Medical Journal click here (login required), and his research article 'SUDEP; What every Neurologist should know' can be accessed here.