22nd May 2013
A study in Cornwall funded by SUDEP Action through Kt's Fund is making waves in Cornwall and across the South-West. Preliminary findings of the study have prompted the expansion of the project into Devon.

The research is part of SUDEP Action’s Epilepsy Life Project that has been made possible by local funding from Kt’s Fund.  Kt’s fund was set up by the family and friends of 20-year-old Katie Hallett who died of Sudden Unexpected Death in Epilepsy (SUDEP).

This unique study looking at the circumstances of people dying in the local community of Cornwall looks to throw up vital new clues to prevention of SUDEP. Research studies into SUDEP are usually restricted to deaths of people who have been treated by hospital specialists. Early findings from research on 50 SUDEP deaths between 2004 and 2012 suggest that many of the people who died had not been seen by specialists or indeed GPs in the year before they died.

The team has completed collection of detailed information on 50 deaths which have been identified as SUDEP.  They have also had their first publication on "Risk assessment in SUDEP" accepted by an international medical journal. This looks at using the SUDEP safety checklist as a tool to reduce risk of death by helping better patient communication. 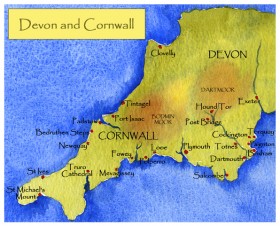 local BBC and press have helped spread SUDEP awareness in the public. Social services have requested local training and three coroners across the South-West have now said they want to help. We would like to extend the work on deaths to include Devon and hope we can attract the necessary funds to do this”.

Dr Shankar and Alan Drake, who are representing SUDEP Action locally, recently met with the local NHS managers in April. Dr Shankar said: “We were able to present some early findings from our research. One highlight is that many of the 50 people with epilepsy who died of SUDEP between 2004 and 2012 were not in contact with either their GP or hospital. This is vital information for the local NHS who have asked to kept informed of all findings"