Home › The choker-style necklace that could save hundreds of lives

The choker-style necklace that could save hundreds of lives

A tiny wearable device that resembles a necklace could in the future save the lives of hundreds of young people each year.

The choker-style gadget, which is worn around the neck at night, alerts a nearby parent, partner or friend, that their loved-one is suffering from a life-threatening event, such as a pause in their breathing (apnoea) or a change in how their heartbeats.

By sending a wireless signal to an alarm, the carer has enough time to put the patient into the recovery position – which can be enough to kick-start breathing again - to administer CPR, or call for help.

Bereaved families at SUDEP Action, launched a fundraising campaign for the device at a Downing Street reception, hosted by Samantha Cameron in 2014 - hope it will prevent other parents from suffering the nightmare of losing a child.

Two million euros have been granted from the European Research Council (ERC) to carry out research towards the creation of a wearable device, to pick up and alert to life-threatening signals. A device which they hope will be available on the NHS to every young person that needs it within six years.

Convulsive nighttime seizures – where the person’s limbs shake and they lose consciousness – can be the most dangerous and are one of many known risk factors associated with sudden death.

Each year, 600 British people die as a result of SUDEP – Sudden Unexpected Death in Epilepsy – more than four times the number of babies who suffer cot death.

Most at risk from SUDEP are young people aged between 20 and 40, and include those who leave home for college, university or work, and women who stop epilepsy medication during pregnancy.

But Barrie and Jan Burns, whose 10-year-old son Charlie died following two seizures within days of each other in 2011, said the device, and SUDEP awareness might have saved his life.
“If medical professionals responding to our son had realised Charlie was at risk from SUDEP - and this life-saving device had been around - our beautiful boy might still be with us,” said Jan, 44, of Bulford, Wiltshire. 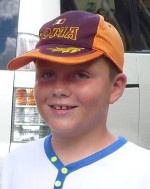 “Charlie was a healthy, outgoing little boy who loved life and lived life to the full, so to lose him so suddenly was an unbearable shock.
Our son died of SUDEP, what we call `a silent killer’ which few people know about. A lot of medical professionals don’t even know what it is. It kills more than 600 people a year, which is more than AIDS and cot death combined, and all parents have a right to know this risk is there.”

Jane Hanna OBE, who founded SUDEP Action following the death of her 27-year-old partner Alan Pring to epilepsy in 1990, will lead a delegation of bereaved families and MPs in Westminster on 17 October to call for an inquiry into epilepsy deaths.

“The ERC funding is the largest ever investment into SUDEP in the UK, despite the number of young lives it claims,” said Ms Hanna.

“We need a culture change and for people to take SUDEP as seriously as they do cot death and indeed other chronic conditions like asthma. People should be able to talk about their epilepsy - and friends, family and especially clinicians should know what they could do to help.”

MP for the Devizes Constituency, Claire Perry, the Burns family’s local MP said: “Hopefully this incredible device will in the future save lives, provide reassurance for young people, and most importantly today, open a conversation about a risk that for too long has been taboo.”

Early trials, led by Professor Esther Rodriguez-Villegas at Imperial College London, along with researchers at University College London, have yielded positive results among a sample of apnoea sufferers. A further 50 people with epilepsy are set to take part in the program this year, thanks to the crowdfunding campaign by SUDEP Action and their bereaved family community.