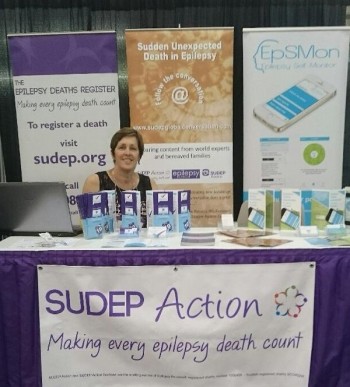 The SUDEP Global Conversation is a collaboration between SUDEP Action, Epilepsy Australia and SUDEP Aware, initiated in 2005 by Denise Chapman, Rosey Panelli and Jane Hanna. The resource, written by experts and bereaved families, has investigated and highlighted the work of SUDEP advocates and researchers worldwide.

Launched in Paris by Epilepsy Australia and SUDEP Action in 2005, the collaboration has helped spread SUDEP awareness globally over the past 10 years through two books in 2005 and 2011 and, since December 2014, through an online resource www.sudepglobalconversation.com

Rosey Panelli commented: “The difference today in awareness of sudep and epilepsy mortality is staggering.  Ten years ago we were in Paris and the international community was just waking up to these issues.  From Paris SUDEP - the Global Conversation was taken to Washington, USA and subsequently distributed on North American epilepsy sites. Being at the AES meeting in 2015 helps us continue sharing the conversations with a massive professional audience in the US and all over the world”

Denise Chapman said: “Ten years on, the SUDEP Global Conversation team continues its commitment to make the scientific research into Sudden Unexpected Death in Epilepsy accessible to all. The progress made in investigating the cause or causes of SUDEP can be traced through the editions of SUDEP – the global conversation, along with the increasing level of community awareness of SUDEP.  Until all questions have been answered, we will continue sharing the conversations with our global community.”

Sudden Unexpected Death in Epilepsy (SUDEP) is when a person who has epilepsy dies suddenly and unexpectedly, with no other cause of death established. It accounts for the majority of deaths in people with chronic epilepsy. Deaths are also caused by accidents, status epilepticus, and suicide.

SUDEP – The Global Conversation is a free resource and is only available for download on the resource site:  www.sudepglobalconversation.com